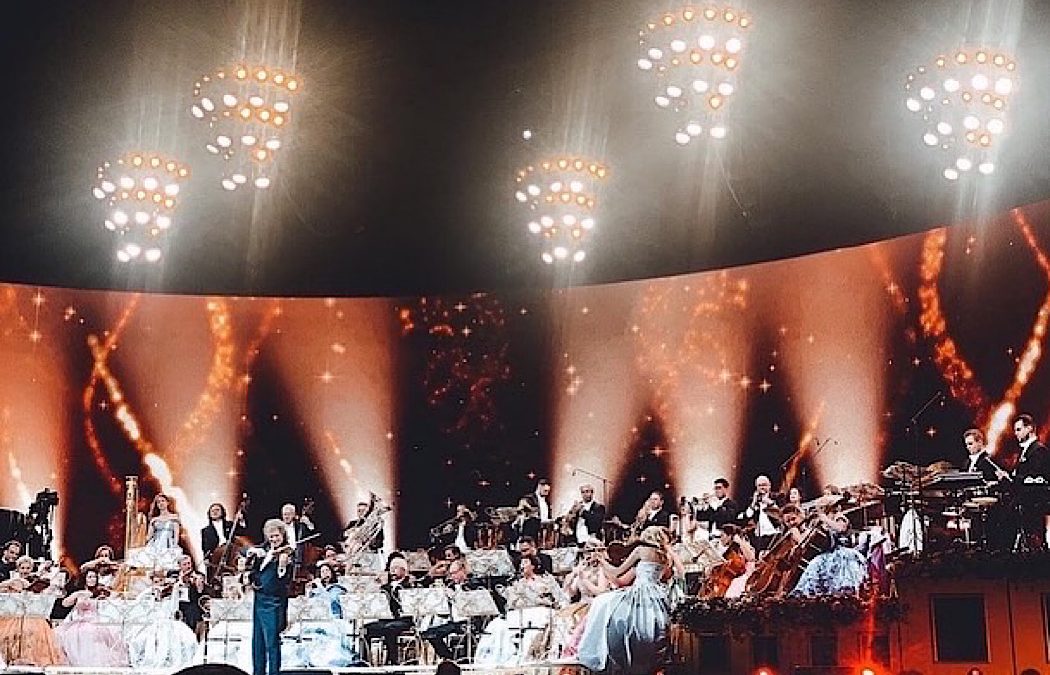 I’ll never forget how enthralled my brothers and I were the first time Mom introduced us to André Rieu and his Johann Strauss orchestra many, many years ago.  It was a performance on DVD, one of his many recorded live performances, and the first of MANY of his DVDs we would come to own.

Fast forward to 2007, when André Rieu and his troupe came to Colonial Life Arena.  The excitement in the air was ELECTRIC at our house as we all donned our Sunday best for a night of elegance and music.  Our seats were in the nosebleed section, and even though everyone on the ground floor looked like little ants, we were still enthralled by the pomp and finery, of the lights and the set, of the ladies’ ballgowns and mens’ tuxedos.

Eight-year-old John was particularly obsessed with Meneer Rieu’s patent leather shoes, which sparkled on stage as bright as his baby blue eyes.

And when he invited the audience to dance in the aisle as he played The Blue Danube, just as he did every time on the DVDs, we watched from our balcony in amiable envy as sweet old couples made their way to the aisle beneath the stage, swaying and shuffling along to the melody.

The whole evening was everything and more than we even imagined it would be, and our only regret was that more people didn’t attend.  We were embarrassed, and offended even, that Columbia didn’t realize nor appreciate the finery that had graciously landed on their doorstep.  But we did.  Nosebleed and all.

André Rieu and his Johann Strauss Orchestra were set to take stage at the State Farm Arena in Atlanta, the start of another rare North American tour.  Two years ago for Christmas, John had given Mom and me tickets for the three of us to attend, and after being postponed time and again due to Covid, it was finally time to claim our seats.

And this time, we were on the ground floor.

With a perfect view of the stage, merely a handful of rows from the front, we were thoroughly immersed in the excitement and splendor, from watching the musicians march down the aisles beside us as they arrived, to the gently falling imitation snow, to the balloon finale at the end.  And when the entire arena rose from their seats and sang in unison as the orchestra played “America the Beautiful,” I stood and watched the audience with tears in my eyes like Captain von Trapp, my heart swelling with national pride and brotherhood.  It was our very own Edelweiss moment in these uncertain times.

However, another moment surpassed them all.

As André Rieu introduced the next piece, “The Blue Danube,” he, like always, graciously invited everyone to dance in the aisle.  Then, as the bright lights faded into a soft blue, John promptly took my hand, we made our way down the aisle to the front of the stage, and there we were — 15 years and many ballroom competitions later, dancing a Viennese Waltz as Andre Rieu played for us.

To say that moment was surreal is an understatement.  It was a beautiful blur as John whisked us along the aisle, nervous missteps and all as my satin sandal evening heels (which were NOT made for dancing) barely stayed on my feet.  But every time I caught site of the stage as we spun around, André Rieu’s gaze was fixated on us with a grin.

John of course injected his usual humor into our dance, and I kept us on count as he flirted with the old ladies in the front row, cheekily waved to the female musicians on stage, and expressed exaggerated exhaustion during the very long orchestral piece.  André would teasingly pause and watch us dramatically stop in the exact position we were in, only to continue on again, as those sparkling baby blues danced in amusement.

It felt like we were the only couple on the floor.  As the song came to an end and we faced the stage, André Rieu lowered his violin, looked directly in my eyes, smiled, and bowed.  I smiled, curtsied in return, and blew him and the orchestra a kiss as I returned to my seat, still floating on the Blue Danube as I went.

Then afterwards, when throngs of people approached us as we left the event, thanking us for our performance and thinking we were plants in the audience as part of show, I wondered what the chubby, awkward, 18-year-old Sarah and her patent-leather-shoe-obsessed little brother from 2007 would have thought of us now.

Thank you Mom, for introducing us to André Rieu all those years ago, and instilling in us a love and appreciation for the classic arts.

Thank you John, for a spectacular evening, and a belated Christmas gift so beyond worth the wait.

And thank you, Maestro, for once again blessing us with your orchestra, your grace, and the healing and unifying power of music, and dance.